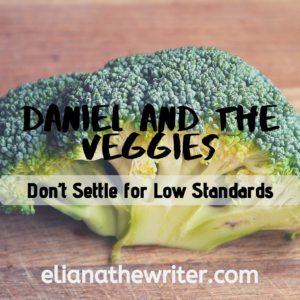 As I mentioned in the last post, I recently read the book of Daniel. I’m guessing that the word “Daniel”  immediately makes you think of the story of “Daniel and the Lions Den”. But the book of Daniel is actually filled up with many other little, lesser-known stories. Last week, I told you about Nebuchadnezzar. This week is–no, it’s not “Daniel and the Lions Den.” It is “Daniel and the Veggies.”
In chapter 1 of Daniel, we read that the king of Babylon takes over Jerusalem and assigns his chief eunuch, Ashpenaz, to gather up some “youths without blemish, of good appearance and skillful in all wisdom, endowed with knowledge, understanding learning, and competent to stand in the king’s palace, and to teach them the literature and language of the Chaldeans.” (Daniel 1:4, ESV.) This included Daniel and his friends, Hananiah, Mishael, and Azariah (whom you probably know as Shadrack, Meshack, and Abednego). Note that they were called “youths.” At that part of the story, they were young. I googled it, and different sources said different things, but they were probably somewhere in the range of 11-15 years old.
Anyways, in verse 5, we read, “The king assigned them a daily portion of the food that the king ate, and of the wine that he drank. They were to be educated for three years, and at the end of that time they were to stand before the king.” Since all the kids would need to stand before the king later on, it was probably important to Ashpenaz that they were raised right.
But for some reason, little Daniel didn’t want the king’s food. We’re not completely sure why, but it could’ve been that their food was unclean and the grapes for their wine were not grown according to a Jewish rule in Leviticus 19:23-25. It could have also been that the food was dedicated to idols, making it way more unclean than normal unclean food. Whatever the reason, little Daniel was resolved not to defile himself, so he went straight to Ashpenaz, the chief eunuch.
Ashpenaz said, “I fear my lord the king, who assigned your food and your drink; for why should he see that you were in worse condition than the youths who are of your own age? So you would endanger my head with the king.” (Verse 10.) Note the lower caps when Ashpenaz said he was afraid of his “lord”. Unlike the chief eunuch, Daniel feared the Lord (upper caps), so he didn’t stop there.
Next, he went to the steward who was in charge of him and his friends (Shadrack, Meshack, and Abednego). Daniel requested this: “Test your servants for ten days; let us be given vegetables to eat and water to drink. Then let our appearance and the appearance of the youths who eat the king’s food be observed by you, and deal with your servants according to what you see.” (Verses 12 and 13.) You can see that Daniel didn’t take up the challenge just to make himself look good because he roped in his friends too!
Well, the steward listened to them and agreed to the test. What happened then? Did they get sick of veggies after three days and beg the steward for their old food back? Did the king kick them out because they weren’t doing well in their studies?
Nope, they actually looked a lot better after switching to this unusual diet. After ten days, their steward decided that they didn’t need the king’s food, so he kept giving them veggies. Daniel and his friends were “better in appearance” than all the other youth! Not only that, but God gave those four kids “learning and skill in all literature and wisdom” and even gave Daniel “understanding in all visions and dreams” (verse 17)!
How about their meeting with the king at the end of their time there? So, the king spoke with all the youth, and he decided that Daniel and his friends really stood out from the other kids. In fact, they stood out from the whole kingdom! “And in every matter of wisdom and understanding about which the king inquired of them, he found them ten times better than all the magicians and enchanters that were in all his kingdom.” (Verse 20.)
Here’s what I got out of Daniel’s story:
How about you? Are you willing to go above and beyond the standards of Christians around you? Do you have what it takes to make the decisions for yourself? Will you settle for what everyone else is doing when the Holy Spirit stirs up your conscience?
A new school year is coming, and with it comes challenges. Some of you might be homeschoolers or go to Christian schools, but still, I dare you to be ready to go above and beyond. Be ready to set your spiritual standard higher than the people around you. (But don’t be a Pharisee!) Daniel was surrounded by other Jewish youth eating defiled food, but he didn’t settle for the crowd’s standard. Will you?