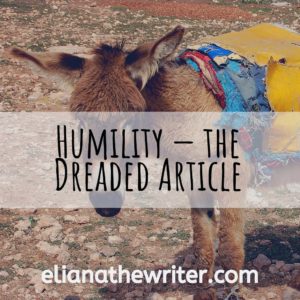 Recently, I’ve been reading the book of Daniel. I read about a king named Nebuchadnezzar, and in chapter 4, he had a dream. “I saw a dream that made me afraid. As I lay in bed the fancies and the visions of my head alarmed me.” (Daniel 4:5, ESV.) He envisioned a beautiful, prosperous tree being chopped down. This was Nebuchadnezzar’s second dream in the book of Daniel, and Daniel came and interpreted this one for the troubled king just like how he interpreted the other dream.

This time, Daniel said to Nebuchadnezzar, “this is the interpretation, O king… you shall be driven from among men, and your dwelling shall be with the beasts of the field. You shall be made to eat grass like an ox, and you shall be wet with the dew of heaven, and seven periods of time shall pass over you, till you know that the Most High rules the kingdom of men and gives it to whom he will.” (Verses 24 to 25.) Like the tree in his dream, King Nebuchadnezzar had grown great and strong. And, like the tree, he would be humbled.

Nebuchadnezzar could’ve humbled himself. He could’ve acknowledged “that the Most High rules the kingdom of men” and worshiped God instead of himself. But a year later, he was taking a little walk on the roof of the royal palace of Babylon, and he said to himself, “Is not this great Babylon, which I have built by my mighty power as a royal residence and for the glory of my majesty?” (Verse 30.)

Uh-oh. God didn’t like that. He immediately fulfilled the king’s dream and humbled him to the level of an animal. “[Nebuchadnezzar] was driven from among men and ate grass like an ox, and his body was wet with the dew of heaven till his hair grew as long as eagles’ feathers, and his nails were like birds’ claws.”

Whoever exalts himself will be humbled… – Matthew 23:12 (ESV)

A gospel perspective on humility

Confession time: I don’t like to read about humility and putting off pride. It’s tough stuff to read about. It makes me feel bad about the low, low creature I am. I don’t even like to write about it. I was planning to write this article a week earlier, but I procrastinated. Humility isn’t pleasant.

God is an infinitely mighty and holy God. The Creator and what He created are in two completely different categories.

To whom then will you liken God, or what likeness compare with him? – Isaiah 40:18 (ESV)

We owe God a lot of respect for just who He is. And if you think about what we (and Nebuchadnezzar!) are like…

All have turned aside; together they have become worthless; no one does good, not even one. – Romans 3:12 (ESV)

That makes it very clear why we should be humble before God. But why should we humble ourselves before other people? In the heat of a conflict, we are prone to thoughts like, “I am better than that person in the area of such-and-such. It doesn’t matter what that person thinks about such-and-such. Why should I even listen to so-and-so?”

Well, looking at this issue through a gospel lens, we can remember how Christ didn’t take his superiority into account before he died for all the unworthy.

Have this mind among yourselves, which is yours in Christ Jesus, who, though he was in the form of God, did not count equality with God a thing to be grasped, but emptied himself, by taking the form of a servant, being born in the likeness of men. And being found in human form, he humbled himself by becoming obedient to the point of death, even death on a cross. – Philippians 2:5-8 (ESV)

After Jesus did all this and redeemed us undeserving sinners, shouldn’t we want to be like Him? If we have been saved by such a wonderful Savior, shouldn’t we strive to imitate His humility? If we forget what Christ has done for us in the moment which we want to put ourselves first, we are as bad as the Unforgiving Servant. The servant was forgiven 10,000 talents by his master, yet he wouldn’t even forgive his fellow servant 100 denarii.

The aforementioned Philippians passage goes on to say:

And being found in human form, he humbled himself by becoming obedient to the point of death, even death on a cross. Therefore God has highly exalted him and bestowed on him the name that is above every name, so that at the name of Jesus every knee should bow, in heaven and on earth and under the earth, and every tongue confess that Jesus Christ is Lord, to the glory of God the Father. – Philippians 2:9-11 (ESV)

After Jesus was brought low, God lifted Him high. We, too, will be exalted for our humility before God and others one day. You can see this pretty clearly in a number of verses–Psalm 138:6, Proverbs 3:34, Proverbs 3:34, Matthew 23:12, Luke 1:52, James 4:6, 1 Peter 5:5… Sure, humility is unpleasant, but the average American lifespan is, what, eighty years? Eternal life in heaven will be more than worth it!

Now that I think about it, I should probably tell you the end of King Nebuchadnezzar’s story, too.

At the end of the days that God was humbling the king and making him live like an animal, Nebuchadnezzar lifted his eyes to heaven and worshipped God. “…all the inhabitants of the earth are accounted as nothing, and he does according to his will among the host of heaven and among the inhabitants of the earth…” (Verse 35.) The king finally got the idea that God was the Most High, not him. God deserved all the praise and glory, not him.

And God rewarded him for that. “At the same time my reason returned to me, and for the glory of my kingdom, my majesty and splendor returned to me. My counselors and my lords sought me, and I was established in my kingdom, and still more greatness was added to me. Now I, Nebuchadnezzar, praise and extol and honor the King of heaven, for all his works are right and his ways are just; and those who walk in pride he is able to humble.” (Verses 36-37.)

Together, like Nebuchadnezzar, let’s strive to put God first and others first. Humility is found in simple everyday things. Putting others first can literally be letting them go first–waiting until after everyone else has chosen their cookie to take the tiniest one, or maybe taking on the nastiest job so your siblings don’t have to. And a practical way for you to put God first may be setting aside the start of your day to read your Bible. If you are following Christ, you’ve already taken a huge step of humility–all glory be to God!