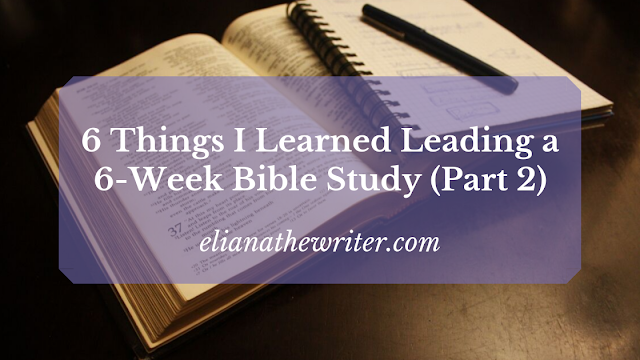 This spring, Hannah and I looked back upon a Bible study we were both apart of that spiritually affected us deeply. I’d been in a couple other Bible studies since then, and I knew how much power they had to make you think in ways you hadn’t before.
Then we saw a need and an opportunity. There were many 9-to-12-year-old girls in our church, including our sisters, who hadn’t been in a Bible study before. And of course, Hannah and I had plenty of school to keep us busy, but summer break was on its way. Why not, just for the summer, lead a Bible study for the younger girls around us?
Last week, I shared about the first three weeks of leading my experience leading a girls’ summer Bible study. This week, I’ll finish up and share the last three things I learned.
Hopefully, some of these reflections will either amuse you or be applicable advice for you if you lead a ministry!
Week #4: The fourth week went smoothly to an average extent. We had mostly gotten the hang of things and gotten into a routine: game, testimony, study, prayer, snacks and chat and maybe another game… Except one of those items was not in the right spot at all.
What I Learned: Never, under no circumstances, hand over the sugar before the study. If you are ministering to kids, beware the pre-study chocolate. It makes the distracting kids even more distracting.
Week #5: The next week went smoothly, too. We had two college students over to share their testimonies, and they played a game called “Do you love your neighbor?” with us all until all the girls had arrived. Then we did our study, prayed, had snacks, and chatted.
What I Learned: Be flexible and have fun. For example, I had planned out a different game, but the girls got bored of it pretty quickly, so we played “Do you love your neighbor?” instead. Plans change. Roll with it. Which brings me to my next point…
Week #6: Funny story–for the longest time, I thought there were six chapters in James. So the sixth week, I planned to go over James 5, and then I planned an extra meeting for the nonexistent James 6. But on the week I planned for James 5, there was a bug making its way through several families, so I ended up canceling that one. Since I had already planned an extra week, and there was no James 6 to study, we got to finish James that week instead.
I also planned an extra hour, so we had fun with it. Hannah and I provided ice cream, and the girls brought toppings. That combined with the games made for a pretty fun end.
What I learned: Plan an extra meeting! It will come in handy!
And I have one bonus tip left for you!
Bonus Tip: Find a partner to lead your Bible study with you! Even though I did more of the study stuff, just having Hannah there for me to do half of the hosting helped a lot in itself. Plus her snack-bringing and pool party-planning. 😉 A partner makes leading a Bible study much more fun!
Also, I gave out a few copies of a simple poll at the end, and I thought you might find the results interesting.
I found it very interesting that the girls want to study a book in the OT. I’m thinking we’ll do Ruth, if not Daniel or Esther. What do you think? Whatever next year is like, I’m already looking forward to it!